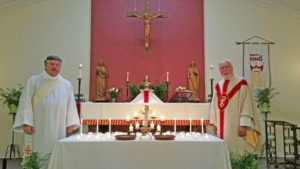 A Brief History of the Episcopal Church of Christ the King

Records maintained by the local newspaper, the Door County Advocate, indicate that the origins of Christ the King can be traced back to the formal organization of the “Episcopal Church society” on April 14, 1878. At that time the parish was known as Christ Church, so named by the then diocesan bishop, Bishop Brown. The church was served by The Reverend Francis Moore who also had oversight of other Episcopal churches in Door and Kewaunee counties. In its first days, the church community assembled at the Town Hall and subsequently in private homes and other non-Episcopal churches. Little is known of these early days beyond the recording of some baptismal and Eucharistic statistics. In 1890 a concerted effort was made to recharge the mission of the fledgling church, although this was met with mixed results, the church eventually being reduced to a single monthly service by 1909.

Beginning in the year 1913, Christ Church was served by various clergyman who shared responsibility for other churches including Algoma, Jacksonport and Fish Creek. Finally in 1927 the Diocese of Fond du Lac purchased a private home for use by the church which, at last, had a place to call its home.

The ensuing years continued to see the coming and going of various Vicars until in 1935 the Diocese indicated its plan to build a church that would better meet the needs of a worshiping community that “has already outgrown its quarters and offers prospects of quick growth.” However it was not until 1950-51 that two Nashotah House seminary graduates, one of whom was serving in Gardener and Jacksonport, proposed at the Annual Meeting the idea of building a church to serve the needs of the church in Sturgeon Bay. At this point the name of the church was changed to “The Church of Christ the King,” the building having been constructed by the cooperative effort of several regional priests, who labored on weekdays before returning to their own churches on Sundays, along with one skilled, paid laborer. The church, though not completely finished, was dedicated on March 28. 1953. A parish house and rectory were added in 1957 which continue to be used by the parish today, although the priest who serves the parish no longer lives on site.

2001 saw the formal decision to join the two church communities of Holy Nativity, Jacksonport, and Christ the King, Sturgeon Bay, into a single congregation served by the same Vicar.

(Compiled from various sources collected by, and in some cases written by, the Historiographer of the Church of Christ the King, Doris Angelroth, with some editing and compilation by The Very Reverend George E. Hillman, retired Vicar.)

A Brief History of the Episcopal Church of the Holy Nativity 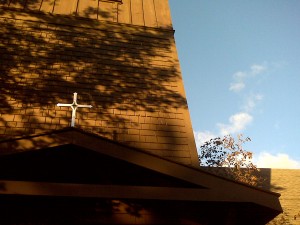 The origins of the Church of the Holy nativity date back to the Summer of 1882 when the first Bishop of Fond du Lac sent the Rev. W.R. Gardner to Jacksonport to minister to the many Anglicans in the largely Canadian population. At that time, Jacksonport, a village of about 850 people, had three piers at which lake freighters loaded timber and fish for the growing cities located on southern Lake Michigan. No fewer than 59 ships loaded with timber left piers during the Summer of 1887.

As a result of the Rev. Gardner’s visit, the Anglicans raised $100 for the purchase of 60 acres of land, enough for the church and for a future Vicar to grow his own crops and support himself and his family.

The Woman’s Auxiliary of the Church of the Advent in Boston sent additional funds which allowed the cornerstone of the church to be laid on September 27, 1885. The first service was held in the building on July 25, 1886. As is traditional in English churches, the altar is oriented towards the east, with the sanctuary separated from the nave by a rood screen surmounted by a cross. The following year, 1887, the first Vicar, the Rev. E. R. Sweatland, arrived.

The grounds once held a vicarage with a parish hall attached to it. These buildings were destroyed b fire in 1936. A cemetery is located north of the church. The oldest grave marker is dated 1890.

To many, the Church of the Holy Nativity is known as “Rev. Jameson’s Church.” The Rev. Joseph Jameson served from 1889 to 1924. With his wife, he farmed the land, raised a family of seven children and initially ministered to all Episcopalians in Door and Kewaunee Counties. One Sunday each month he visited missions in Algoma, Sturgeon Bay and Fish Creek, traveling by bicycle, or by horse-drawn carriage when the Bishop visited. By the turn of the century the Rev. Jameson was able to concentrate his efforts in Jacksonport and Fish Creek alone.

With the end of the timber and fishing booms, the population of Jacksonport shrunk as did the church’s congregation. The church no longer has a resident Vicar but is served by the Vicar in Sturgeon Bay.